Another entry from Official Guest Blogger Rafael on sources of inspiration for his Blackmoor games: 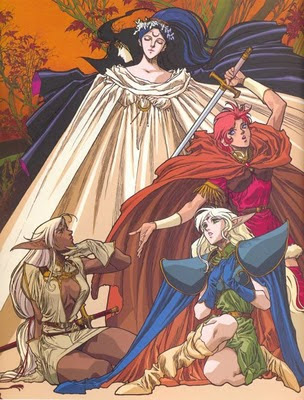 In my (apparently developing?!) series about things of all kind that might make a good inspiration for Blackmoor, I sooo want to take a closer look to a series, or better, a setting I mentioned in the “Northlanders” review:

The World of “The Lodoss War”, where “The Lady of Pharis”, another extraordinary comic book is set: Having long become an all-time classic among anime-fans all over the world, “The Record of Lodoss War” OVA (=direct-to-video-series) is the best product of a franchise that can basically be described as “Japanese D&D”.

Being based on ACTUAL OD&D SESSIONS in which the main author and developer, Ryo Mizuno participated, this is like the closest you can get to classic D&D fiction without relying on ebay, or WotC periodical republications (kudos to Wizbro for rereleasing a lot of the old stuff from time to time, btw).

An entire universe on its own, “Lodoss War” and the RPG it is “officially” based upon, the Japanese “Sword World”, span dozens of gaming books, novels, graphic novels, artbooks, musical CDs and even a few video games. – And, Yours Truly absolutely loves it.

You can perfectly be a friend of fantasy literature today without knowing “A Song of Ice and Fire”, “The Dragonbone Chair”, or “The Name of the Wind”. – However, if you miss “Lodoss War”, especially the first OVA, this is like not having seen Peter Jackson’s “Lord of the Rings”, at least as far as I am concerned.

What connection, you may ask, is there between some Japanese RPG to “my” or “The Maiden’s” Blackmoor? – “Lodoss War” is, more or less, how I visualize D&D for myself! The dragons in my mind look like the Lodoss Dragons, and the Elves look like Lodoss Elves, and the “Evil Island Marmo” is pretty much how thought of the darker places in “The Grim Winter”.

It’s been years since I first suggested the 1990 “Record of Lodoss War” OVA to my players as the kind of introductory material they would want to watch to get into my style of  D&D. For my personal view of roleplaying and fantasy, I think, it’s safe to say that the Lodoss universe was the one that influenced me the most, at least in the last few years.