The Grim Winter Campaign: Behind the scenes! 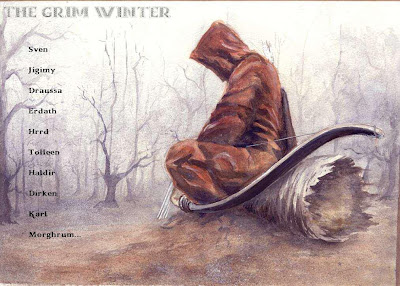 Back in 2005 began what would become the longest running Blackmoor PbP Campaign in history. After 5 years of play, the game is still not over. It's sequel, Road to the Promised Land was announce last year.  The players are a group of highly dedicated and creative gamers, including original Blackmoor player Greg Svenson. Blackmoor author Jeff Quinn also took part in the game for a while.Other Blackmoor fans and game designers are avid readers of the game.

Back in 2006, the following add was posted for the campaign:


A Grim Winter has fallen over the lands of the Bitter North, as valiant heroes and vile foes fight for the control over the once so beautiful lands called the Duchy of Ten! While the troops of Blackmoor and Vestfold march on against the cannibal Afridhi, two small bands of rogues and mercenaries travel through the battered lands of the West, following their quests that might come to determine the outcome of this lethal conflict... If you want to come to the rescue of poor Ten's helpless citizens, and join our brave heroes in their perilous attempts to free the lands of men from Toska Russa's iron grip, then read on carefully...


Today. Grim Winter DM, Rafael, revealed some of his secrets over at Dragonsfoot:


What I would suggest new DMs, or DMs unhappy with the course of their games:


1. Keep a slow pace. Daily updates are difficult to manage for most people, but updates two or three times a week are doable. The better you adjust to the gaming rythm to your players,
the more probable is it that you can go playing on the long hand.

2. Don't write a novel. Or, well, do. In any case, keep the measure of the game modest.  This is the most important thing I think many DMs don't understand, IMO. The way I run PbPs, even the standard 32-page adventures by TSR would take more than a year to complete. So, my suggestion would be to have a DM script of, say ten pages, which you can complete in just a few months.


- And then, revaluate if the game has potential for successful continuation. That way, you will get less frustrated, should the group lose interest in the game, than if you go on and prepare a monster project. 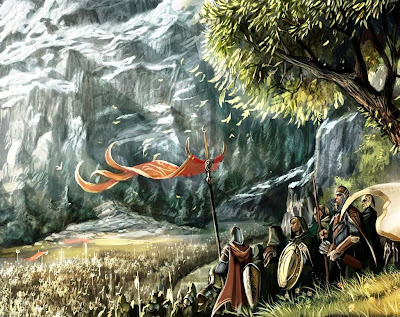 I have been fortunate enough to participate with a small role as the hardened soldier Harwan, who started out as a Sergeant, but has now become promoted to the rank of General. I am looking forward to the sequel and I know the core players are doing the same!