Realm of the Egg Part II

Here's the second installment of my take on the Realm of the Egg. 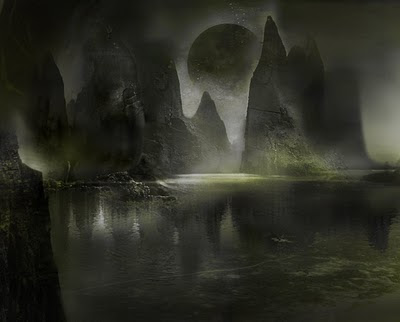 The Realm of the Egg is a place filled with sinister disorienting mists. Large towering structures can be seen surrounded by smaller ruined and abandoned buildings. Cities and towns appear desolate, although there are always creatures lurking in the shadows. Structures originally built by Merfolk can be seen among ruins.

Travelling through the land, the landscape will seem surreal to explorers. Magical experiments, permanent gates to other planes of existence and rampages of demonic creatures have turned the lands of the peninsula into a bizarre twisted realm.  Woodlands such as the Thornwood, the Forest of the Druj and the Weirdring Woods are dark and sinister places, where even plantlife seems hostile. These are not green wonders of nature, but black and thorny areas bearing little resemblance to forests in other lands. Mountains and hilly landscapes can be found in the humanoid infested Trollop Mountains and the infernal Locust Hills.

Four major settlements are hidden in this terrifying landscape; The Egg’s Nest, Ohmfet, Trollgate and Harbol. 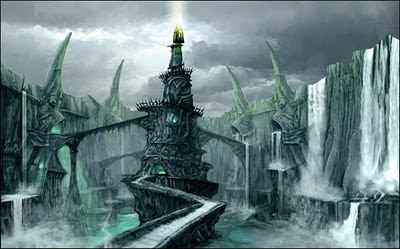 The Egg’s Strongholds
The Egg’s Nest is an impenetrable fortress. Colossal rocks enforced by rusting steel bars and huge iron doors are some of the most prominent features of the Nest. Going deeper underground, the halls are a mixture of metal rails, cold rock, mushy swamp like growths covering some of the walls and slime dripping from the ceilings.

In addition to the Nest, three other strongholds guard the corners of the realm: Ohmfet, Harbol and Trollgate. Harbol lies to the south. It is from this nefarious place that constant attacks towards the Glendover are sent. Baron Bascom Ungulian made an attack on this fortress, but was captured and stripped of any memories of the place. Ohmfet occasionally sends envoys to meet with the people of the Duchy of the Peaks, but the people of the Peaks are frustrated that these envoys are oblivious to the temptations the Peaks have to offer. Trollgate guards the northern border. As the name implies, this stronghold is populated by Trolls and other humanoids who carry our raids on the Skandaharian and Frisian neighbours. At times, they Skandaharians have attempted to fight back, taking the war to the Egg. The last time they did this was a raid lead by one of the Skandahar’s greatest warriors; Moorkok the Slayer. When Moorkok succumbed to the domination of the Egg, the Skandaharians fled. They have not forgotten this loss.

Email ThisBlogThis!Share to TwitterShare to FacebookShare to Pinterest
Labels: Duchy of the Peaks, Egg of Coot, Moorkok, Seafolk