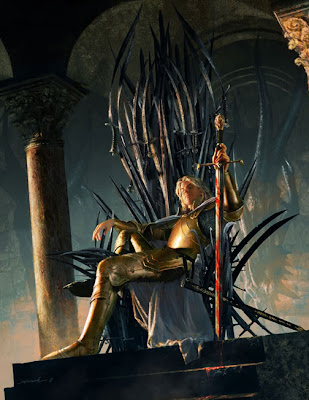 I don't get to play as much as I once did, as a player or as a DM. This is something that happens to us all as we grow older I guess. Due to lack of time, the Blackmoor campaign I started last November fell apart after only a few sessions. So when my old friends and I decided we'd get together for a full weekend of gaming, I saw the opportunity to revive it for a one-shot.

The premise was simple. King Uther was killed during the Afridhi War and a corrupt unsurper has overtaken the kingdom. The players took the role of conspirators, trying to find a way to get rid of the king. But how to kill a king and get away with it? I decided to leave that up to the players. What they did was to start a riot in the poor quarters of Blackmoor Town. This was an excellent diversion, allowing some of the PCs to sneak into the Castle. The King still kept a handful of extremely competent Royal Guards with him, but they were finally defeated and the king was killed. Now Blackmoor is without a King, and the Egg of Coot has launched an invasion. I look forward to getting the group toghether for a followup of this game!

Email ThisBlogThis!Share to TwitterShare to FacebookShare to Pinterest
Labels: The Brotherhood