A small chat with Jeff Quinn

Last week, I had a small chat with Jeff Quinn. Jeff was one of the main writers involved with the Blackmoor D20 line. He contributed to the D20 Dave Arneson’s Blackmoor Sourcebook and wrote the Redwood Scar. He is also known for his work for Goodman Games. Jeff fondly remembers the days of working with Dave Arneson:

“Dave was a great guy and was so full of ideas for everything he did. Blackmoor was the jewel in my career, and my designs and gaming life are richer for knowing both Dave and Blackmoor”

Jeff Quinn is currently the owner of Dolmen Creative, which is in the process of publishing new RPGs using the D6 Open system. One of the projects Dolmen Creative are working in is Destiny6 RPG. Previously in this blog, I have mentioned how Jeff pays homage to Blackmoor in the Destiny6 Fantasy Setting.
How much of Blackmoor’s heritage will be seen in the final Destiny6 Rulebook?

“Consider this my take on Blackmoor (though I can't use the name) after the Afridhi invasion was repelled and the Egg was defeated... close to 200 years past the d20 version “

Jeff also showed me a few pictures of from the upcoming book. One picture shows a dwarf fighting a strange dragon. The dwarf is armed with twin flint lock pistols. The other picture shows a group of adventurers sitting around a table. One of the adventurers looks like a….Panda Samurai? 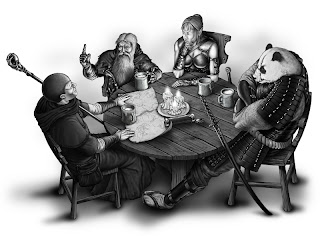 “Yes, that's an oriental panda warrior. In the second picture, the dwarf is fighting an evolved dragon. i love dragons... but I wanted Destiny6 to feel unique in its take on dragons... the typical western and eastern style dragons are banished to the monster books as fire-breathing treasure vaults... these guys, on the other hand, will evoke a bit more fear... they are smaller, hunters, and can come right into your home to get you.”

Bearfolk also made a small appearance in the Blackmoor Setting. They first appeared in Rafael’s Last Fantasy Campaign where the Bearman Hrrd was played by the legendary Rizak. 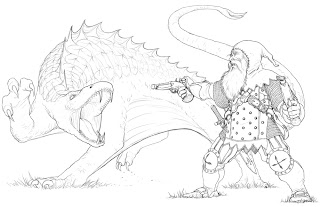 Jeff Quinn also has a Q&A thread over at the Comeback Inn Forum and drops by regularly to answer questions.