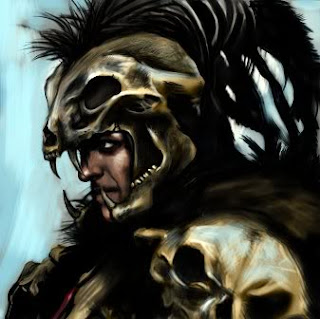 Two centuries ago, Calelrin, God of Murder and Deceit lead a tribe of Peshwa out of the Plains of Hak, on a long journey south. Over the years, the Krugel tribe became very different from their Peshwa cousins. Under Calelrin’s influence they became a cruel warrior people, strangers to words like mercy or kindness. They are horseman nomads living on grassland steppes in distant lands south of Blackmoor. These days they are sometimes used as elite cavalry by the Thonian Empire.

Personality
Kurgans are a brutal people, their personality shaped by the harsh life on the steppes. They are infamous for their cruelty and reputed to toss children into pits full of starved dogs, and watch them fight for the meat for amusement. They practice animal husbandry, keeping horses, cattle, pigs, sheep and goats. They prefer to ride geldings, their main herds being kept wild under stallions, and controlled through the mares which were hobbled near the settlements and milked regularly

Physical Description
Kurgans are taller than average humans. They have gray eyes and dark hair and hard features. Unlike their browned skinned Peshwa cousins, their skin is pale. They often dress in dark colors and often decorate their armor with the bones of horses, including the characteristic jaw bones attached to their helmets.

Alignment
Kurgans are usually Neutral Evil. Good Kurgans will be outcasts from their people, and will be viewed with suspicion in other lands. Few live very long.

Lands
The realms of the Kurgans are now part of the Thonian Empire. Their lands are typically flat steppe grasslands, near wooded areas and watercourses. There are mixed forests of oak, birch, fir, beech, elder, elm, ash, aspen, apple, cherry and willow. Wildlife in these lands include aurochs, elk, boar, wild horses, wolves, fox, beaver, squirrels, badgers, hare and roe deer. These lands are also known to be home to a large lizard known as the Sheltopufik. It is not venomous, is often six feet long; it moves about with erect head and breast, and when pursued defends itself by darting against the horse and his rider. The Kurgans live semi-nomadic lives, but the occasional hill-fort and village can be seen when travelling through these lands.

Relations
The Kurgans have become subjugated by the Thonian Emperor, but enjoy relative freedom within the Empire. The Kurgans found that they were soon gaining a reputation for being great mercenaries. They are frequently employed as elite Cavalry by the Thonians. Some are even deployed on the Thonian Rand near Blackmoor. The Peshwa view the Kurgans as an abomination and fear them as do most others who have heard of this people.

Religion
Kurgans follow the Peshwa pantheon, but hold Calelrin the God of Murder Deceit above the other gods. Calelrin’s murder of his brother Hadeen is seen as a holy act to the Kurgans and many Kurgan warriors have tried to seek out the place where Hadeens body fell to worship the cruelty of their God.

Language
Kurgans speak a dialect of the Peshwa language. Most also speak Thonian.

Names
Kurgans go by their first name and a clan name.

Adventurers
Kurgans who travel the world are often mercenaries. Most adventurers are Fighters or Barbarians. High level Kurgans can become Dragon Knights, in spite of their evil alignment.

Discussions on this topic