Blackmoor Reference in the Tomb of Horror Prime 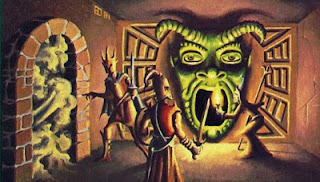 Stormcrow over at the Tombs of Horror Blog, made a pretty interesting discovery the other day. When the original Origins I Tomb of Horrors was sold on eBay, the neat sum of $1526.01 was more than the blogger could afford. The packaged included 1 cover page, 1 map page, 1 character list, 9 pages on the tomb contents and 24 pages of drawings. Fortunately, Stormcrow began to examine the pictures distributed for the auction. They were blurry, but he made out the following:

Talking to Stormcrow and Grodog about this, we have become fascinated with the references to Blackmoor and the Egg of Coot. Also, as Grodog pointed out, it is interesting that the Egg of Coot was replaced by Iuz in later versions, perhaps suggesting a link between the Egg and Iuz?