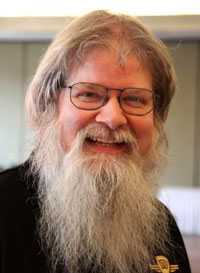 Ed Greenwood is probably best known as the Guru/Creator of the Forgotten Realms and Elminster, but like most of the best TSR game designers, he also ventured into the Mystara setting. The book he wrote was Gaz8 the Five Shires, the book that introduced the term Hin to describe the setting's Halflings. Ed later brought this term into the Realms as well, perhaps a nod to his romance with Mystara?

I never really got into the Forgotten Realms much, but when I saw Ed Greenwood on Celebrity D&D from GenCon2010, I just decided this guy is awesome.

"I have fond memories of each Gaz release, but I think Bruce [Heard] really brought the setting to life. The standout Glantri product, the Princess Ark series, the superb DRAGON coverage of the dragons of the setting . . . wonderful stuff that stands the test of time. I'm raising a glass of very good wine to Bruce, as I type this!"

I already talked about Gaz3 the Principalities of Glantri the other day, mentioning how it was the first product to connect the Blackmoor DA modules with the Gazetteer line.

"[...] Bruce, you're the heart and soul of Mystara. I know you had to ride herd on a lot of projects for all of TSR's lines and settings, but the Known World was your baby and a delight to write in...because of you. Don't hide; you deserve public praise you all too seldom got. (And I think it's long overdue for a publisher to give you a fat contract for, say, a fantasy trilogy, so you can show the New York publishers what you can do, and give all of us fantasy fans a new setting to fall in love with!)
We must sit down somewhere and somehow for another nice long dinner and chat..."

Now this almost ruined my image of mr Greenwood as a recluse who almost never emerged from his house in Canada (not sure where I got that image from?), but as someone who enjoyed the Voyage of the Princess Ark series at least as much as Ed Greenwood, I sure hope publishers are listening to this. I almost managed to convince the Paizo guys to publish a Voyage of the Princess Ark collection back when they were still in partnering up with WotC, but even if that boat has sailed (flown?), more fiction from Bruce is something I am looking forward to seeing.