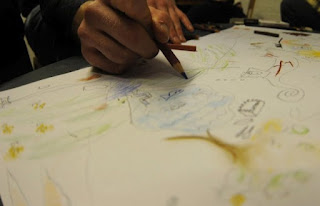 One of the lessons WotC and other companies seem to have learned from 3E is that if the edition requiring alot of preparation before a game this is a bad thing. This apparently, is part of the reason why 4E turned out the way it did.

I can understand that 3E DMs soon grew tired of writing up huge stat blocks for their NPCs and determining skill selections for their Monsters. Some industry experts seem to think the recipe is to turn D&D into a "family game", ie basically a board game, since apparently kids today have no patience to sit down and spend hours to plan a game.

This is where I think that they are missing something. Sure it was boring to write up those huge stat blocks or do other game mechanical stuff if it takes forever. But DM Prep Time is not neccessarily such a bad thing. When you are a kid, it seems like you have all the time in the world. Spending hours dreaming up worlds and planning adventures that you can take your friends through Friday night can be almost as fun as playing the game itself. As a DM, this is when you really get to tap into your imagination.

Remember when D&D was marketed as "Products of your imagination"? This is D&D's strength. Market researchers trying to get game designers to focus on the "battle grid" and fast paced exciting combat only are missing a vital point. These are all areas that computer games do better than D&D. What D&D does better than any computer is to stimulate your imagination. I dont believe that kids today dont want that. Sure there are kids out there with no imagination, but those are the same kids who were calling D&D players geeks back in the 1980s. Those guys will always be boring. D&D should be for real gamers, not those guys who would rather play a video game alone than hang out with their friends.