My fake Blackmoor Space cover, which I posted about a year ago, sparked quite a controversy. We all know Spelljammer is an acquired taste. However, when I made the cover I though of it just as an experiment. I had no idea that there actually was an official connection between the two settings. 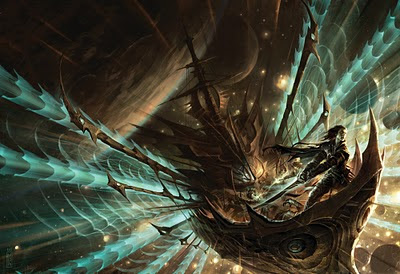 My friend Big Mac over at the Piazza pointed me to the following:

A tradesman called The Happy Gauntlet launches from the [Blackmoor Civilization], its captain completing many voyages before stumbling into an illithid ambush. The entire crew, except for the captain's wife, Sharanger Szeltune, are destroyed by the mind flayer's mental powers. She is mortally wounded but is able to unleash powerful spells that allow her to take the helm and retreat. She then retreats to a safe world, lands her ship in a hidden location and transforms herself into an archlich.

The description above is paraphrased from the adventure "I must Go Up to the Stars Again" p 7-8 SJR1 Lost Ships. Granted, the adventure specifies that this is the Greyhawk version of the Blackmoor Civilization. On the other hand, was there really a Blackmoor Civlization on Greyhawk, or just a small region? This can be used or ignored as one wishes. It seems clear that the author, Ed Greenwood, wanted to give a nod to Arneson's setting at least.