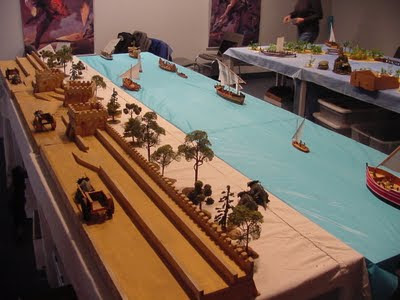 Last weekend was the time of the 3rd Annual David L. Arneson Maritime Miniatures Event. As I mentioned when I first announced this about a month ago, the event took place at the Fantasy Flight Games Event Center in Roseville, Minnesota. The miniatures game was announced to take place on Saturday, but as things developed, it ended up taking the entire weekend, featuring among other things Dave Arneson's character, Captain Harchar. At the Comeback Inn, Chirine Ba Kal reported the following from the event:

"We had eight players for the first game and six for the second, and lots of people who stopped by to have a look and talk about Dave and Harchar. Things ended about ten pm, and we loaded out by eleven pm.

Everyone seemed to be having a great time, or that's what they told me; I'm way too close to the thing to be objective. The players, the people who dropped by, and the Event Center staff were all very impressed by the tables and the games, so I think we can call this one a success. We handed out a lot of flyers and took a lot of pictures, and I'll get those sorted out as soon as I can.

The planning for the next event is already started, and I'm both startled and delighted with the way that people here and outside the Twin Cities want to make this a bigger and better event; Dave had both a lot of friends and a lot of influence on our shared hobby and I'm touched at the happiness that we managed to generate this weekend. It was a lot of work, and I'm exhausted; next year, though, more people want to help out on the organization side of the event and I'll be able to concentrate on the game side of things."

More about this years event and future events will be revealed here.