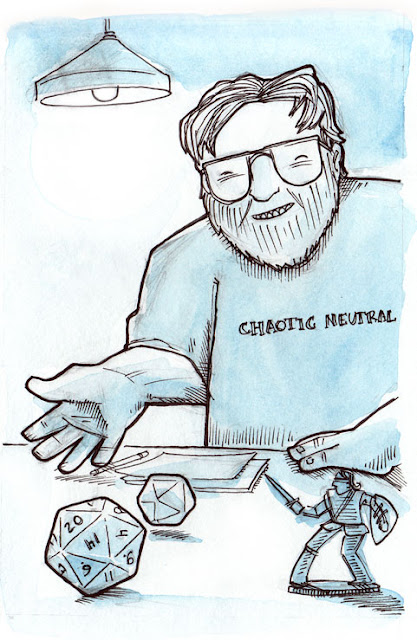 While Dave Arneson may have been the first Dungeon Master, he also enjoyed being on the other side of the DM's screen. As with most roleplayers, he started out as a player.

A formative moment in the life of young Dave Arneson was when his parents got him Avalon Hill's Gettysburg War Game, in the early 1960s. A few years later (1965?), he joined the Midwest Military Simulation Association which used to meet at Greg Scott's house. When the group became too big, the younger and more war game interested of the group, Including David A. Wesely, Dan Nicholson and Pete Gaylord split from the rest and began meeting at Arneson's house instead.

"And yeah, Dave is a SUPER bad-ass player. You'd never know it talking to him out of context. Sweetest guy in the world. And then at the gaming table, he suddenly eats your spleen."

One of the more epic moments in Dave's career as a player was in David Wesely's Braunstein 4: Banana Republic, as Wesely recalls:

"He lied, swindled, improvised, and played his character to the hilt. He came to the game with fake CIA ID he’d mocked up, so when another player “captured” and searched him he could whip them out. Other players were still moving pieces around the board and issuing orders like a wargame while Dave Arneson was running circles around them and changing the whole scenario. He was winning the game entirely by roleplaying.
You may think of Dave Arneson as one of the godfathers of GMing, but even before that he was the godfather of players. He was, literally, the proto-player."

"He was just one heck of a lot of fun; like a lot of his friends, he was very fast on his feet and very, very smart. He threw himself into any role that he took... Dave's showing up out at Phil's was always a good indicator that it was going to be a good night; we'd just hang on to the roller coaster, and watch the fun unfold."


If you have been asking yourself where Dave Arneson got all his ideas and creativity from then perhaps this is could be the answer. Creativty comes from passion, and we know that one of Dave's true passions was games, whether running them as a judge or DM, or enjoying them as a player.