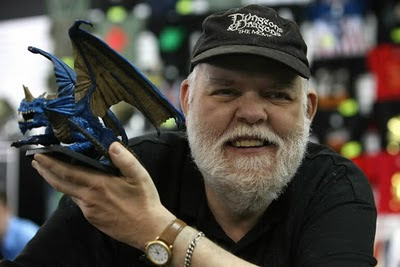 It's been almost one year since Dave Arneson passed away. Today a memorial event was announced:


The second annual David L. Arneson Memorial Maritime Mayhem Miniatures event will be held at The Source Comics and Games on Saturday, April 10th, 2010 at noon.

Dave's infamous Tekumel character, the rascally Captain Harchar, will feature in two epic sea fights: "Captain Harchar versus the Hlyss nestship", in which the captain tries to keep his crew and passengers from becoming living incubators for the larvae of these insectoid non-humans; and "Captain Harchar versus the Customs Officials", in which the captain tries to get his cargo of unlicensed, untaxed, and undeclared luxury good past an armada of enraged customs and excise officials while dealing with his piratical associates in the Clan of the Blazoned Sail.

No experience needed; rules and miniatures will be provided. No fixed
times for players to participate; drop in and out as you want. For more information, please feel free to e-mail me: chirine@aethervox.net

I for one, envy those who will be able to attend!