The Most Enthusiastic Blackmoor Player

In the First Fantasy Campaign, Dave Arneson described Richard Snider as one of the most enthusiastic players of the original Blackmoor game. 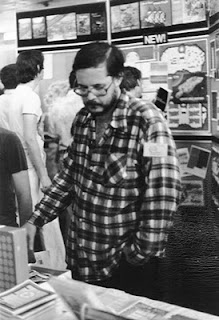 Last November, I was sad to report of his passing. In my experience, a D&D campaign is never better than the players. The best games I have DMed, have been so enjoyable, as much thanks to the players as to the DM. Arneson recognized how lucky he was to have such great players. In the FFC, Arneson describes how Snider "evolved an entirely separate campaign and mythos" as well as developing more advanced rules for dragons.

Richard later went on to develop his own setting; the Perilous Lands, which he continued to work on long after the books for it had been out of print.

Above is a picure of Richard from the 1980s Origins Convention.