The Afridhi are described as a race of hillmen from a frozen land. The Afridhi depended on fire to survive and fire became their god. They are a conquering race of humans with unnaturally black skin and red hair. They are violent fanatics lead by their high priestess, the terrible Toska Rusa (Rosy Dawn). Gradually the Empire of the Afridhi has expanded and is now threatening Blackmoor itself. In my campaign I describe the Afridhi as having their bodies decorated with glowing tattoos like the Dark Prince from the Prince of Persia games shown below: 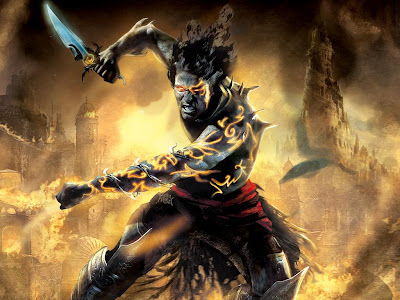 The Afridhi were revealed to the general public in DA4 Duchy of Ten. Because DA4 was the one module of the DA series on which only Dave Ritchie's name appeared, some have speculated that the Afridhi were an invention by Ritchie. However this is not the case. I have previously discussed the nature of the working relationship between Ritchie and Arneson.

The Afridhi were actually introduced in Dave Arneson's Campaign around 1975 (Date yet to be confirmed). Dave created an image of the Afridhi as a kind of devil worshippers to his players. As was normal in Dave's campaign, other players would take on the role of the bad guys, and the Afridhi were no exception. Toska Rusa was most likely played by a Deborah Naffziger as Jeff Berry explains:

[Naffziger was]one of Prof. Barker's original EPT players and one of the early players in Dave's Blackmoor. (She also played in Greyhawk with Gary) She was the only girl in local Twin Cities gaming for many years, and the description of the character sounds pretty much like the one she had out at Prof. Barker's.

Toska Rusa and the Afridhi were at one point available as Miniatures, as part of the Blackmoor Miniatures Line. The Afridhi remain one of Blackmoor's most dangerouns enemies.


Thanks to Greg Svenson and Jeff Berry for providing much of the information above.