The Great Rain of Fire

The Great Rain of Fire. A fiery cataclysm, destroying Blackmoor and Thonia, sinking lands into the sea and turning their shores into broken lands. When David L. Ricthie was asked to write the DA-series of modules for the BECMI/ Classic D&D line, Ritchie incorporated Blackmoor as a realm from Mystara's past. Ricthie detailed how the technology introduced to the Blackmoorians through the Temple of the Frog and City of the Gods would eventually lead to disaster. The combination of magic and technology would lead to a cataclysm.

The Great Rain of Fire was both a device that allowed Ritchie to connect Blackmoor to Mystara, but also the logical conclusion of the revelations from DA2 and DA3, which again were based on the details on St. Stephen in Supplement II. What would happen if a fantasy kingdom got its hand on highly advanced technology? Could this end in any other way than disaster? 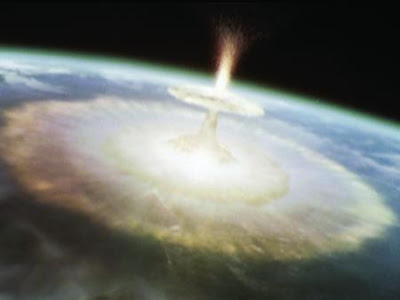 What role could the Great Rain of Fire play for a DM who does not assume Blackmoor to be connected to Mystara? In my own campaign, I assume Mystara to be a possible future for Blackmoor, not a predetermined one. Blackmoor could end up destroying itself in a cataclysm, but this is not something that has to happen. What I did was to feed my players with prophecies about a coming Great Rain of Fire. This could be tied to the combination of magic and technology, but there could be a number of other explanations for the world to be destroyed.

What purpose would this story element have? The world is going to be destroyed? Why are we playing in this setting again? My idea was this. The Great Rain of Fire is what happens if the players do nothing. The prophecy has allowed the players to learn of this possible dark future, meaning that they have a key to changing it. While it creates an ominous atmosphere, there should be hope. Also, this means that the player characters matter. The coming Cataclysm can be averted and you are the heroes who can prevent this.