Age of the Wolf art part 3

Here's more art by Lee Smith, originally intended to grace the pages of the Age of the Wolf book. Thanks to Lee, I am proud to be able to share this with you. These images give us an even better idea of where the designers were planning to take Blackmoor: 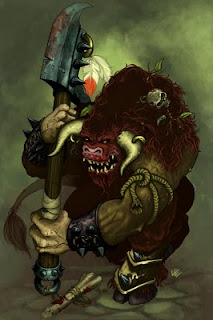 "The Beastman is a type of humanoid unique to Blackmoor. The beastmen of Blackmoor come in many different colors and varieties, but they all share some basic physical characteristics: All beastmen are a little larger than a large human, with long coarse fur and yellow-gold eyes. They have powerful, barrel-like chests and muscular arms that are almost long enough to drag on the ground. Each beastman’s head type is random, even within family units and clans."

Its good to see the Beastmen having a role in Age of the Wolf. I have often found them more interesting than Orcs which feature in every setting.

The Hills Have Eyes: 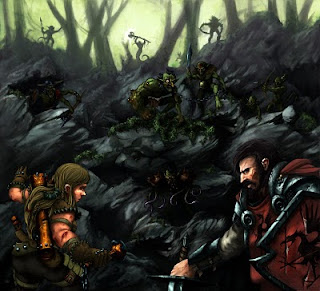 "A pair of unlucky adventurers encounter a band of Mutated Ash Goblins on a rocky ridge. Soon they will be overwhelmed by these vile creatures and taken to the Brood Mother to decide their fate."

Ash Goblins were introduced in the D20 line, but they just seemed to be an arbitrary monster included in the 3E Sourcebook and I could never figure out why they had used them instead of various other monsters from the DA series for instance. However it seems like they had more ideas planned for this race to be revealed in the Age of the Wolf Sourcebook. 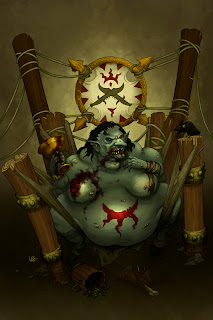 " The Brood Mother of the Korkak tribe of mutated ash goblins is a repulsive form that remains only vaguely humanoid. She is a hideously obese and over-sized goblin, wrapped in roll upon roll of loose, flabby flesh. A tiny head with greasy hair stares with maddened eyes from above, while vestigial arms and legs flail and twitch without purpose. Various vermin crawl from between the folds of skin. Incapable of movement, bereft of any prehensile dexterity, the brood mother is utterly reliant upon her tribemates to survive."

Okay, that is gross! This is a new addition to the Ash Goblin ecology. Seems like a pretty interesting idea for a creature and it also makes the Ash Goblins more different from regular Goblins. This is a good thing. In the 3E version just seemed like Goblins with a few modifications and I was wondering if it was really worth it. Now that they were developing their society and ecology more, I am beginning to see the sense of including this creature. You know, in spite of the gross nature of these ladies... 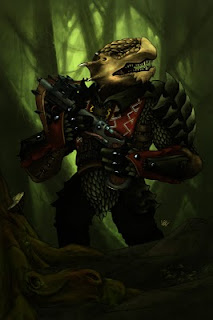 From the all-dragonborn city-state of Rodhin, he is part of a secret group, called the Bombardiers of Rodhin that serves the dragonborn king. Originally, the bombardiers were archers. Since Rodhin started developing greater technological prowess, they have replaced their bows with mechanical bolt-throwers powered by explosive steam power.

I've been wondering about Rodhin since I noticed it on the Age of the Wolf map! From the 4E sourcebook on, we knew that they would be giving more room to the new 4E races. Not sure how interesting this would be to long time Blackmoor fans, but if you are going to include Dragonborn it makes sense to have their city in the Dragon Hills. It is also interesting to see that they were planning to introduce what appears to be gun powder weapons into the Age of the Wolf. 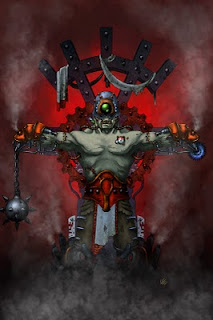 "The Revelation Deathpriests are part of a crazy cult obsessed with the act of re-animation, and have been driven mad by their desire to reconcile the gulf between science and magic. The cult’s activities involve tinkering with life and death, and result in the creation of rather a lot of tech-infused undead."

Another disturbing image. These remind me of the Necrotech I suggested for the Egg of Coot. I have no idea if this cult is linked to the Egg, but it would make sense in my opinion.

Finally, I would like to take another opportunity to thank Lee Smith for finnishing these wonderful paintings even though the project has been cancelled. At least we can get another glimpse at what this product line was intended to be like, even though it never saw the light of day. I hope you guys enjoy seeing these as much as I do!

Email ThisBlogThis!Share to TwitterShare to FacebookShare to Pinterest
Labels: Age of the Wolf, Art, Lee Smith