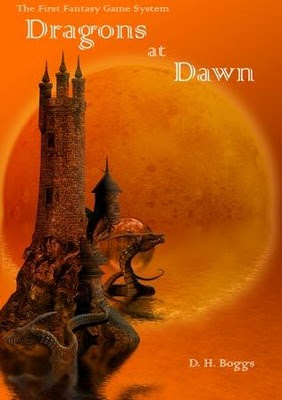 The following was announced by aldarron at the Comeback Inn yesterday:

The long asked for, long awaited recreation of the rules behind Blackmoor...


Welcome to Dave Arnesons Basement. It’s 1971 and you’ve been invited to play this cool new game… Experience the thrill of the very first RPG adventures with Dragons at Dawn, the rule set that hearkens back to the first days of adventure gaming when everything was new and the possibilities endless. Dragons at Dawn is a retro tribute to the very first fantasy gaming system pioneered by Dave Arneson, the man who later went on to co-author the worlds most popular roleplaying game. The result of years of careful historical research, Dragons at Dawn is entirely consistent with Arneson’s original, largely forgotten methods of play developed roughly in the period 1970-1973. It is an imaginative foray into what it was like to game long before the rules were available in stores.
The History:
Partly inspired by a horror movie marathon, Arneson sat down one weekend in December of 1970 and began the design of a castle and village peopled with monsters and heroes, with players able to play either one. Mr. Arneson thought it would be fun to have the players adventure as individual warriors in a vast dungeon beneath the castle. His group of Napoleonic wargamers loved the new game and clamored for more. There were no rules for this sort of thing so Dave made them up, inventing things like character classes, ability scores, experience points, magic systems, alignments, and level advancement. Later, Arneson introduced his new game to Gary Gygax and the two partnered on writing up a rule set that became quite famous, but was quite different from the game as Arneson played it. Dragons at Dawn returns to the first version of play at the dawn of fantasy RPG gaming.
The Game:
First debuted at the 2010 Dave Arneson Memorial Game Day in NYC, the 60 page rule book allows play in two formats; original game where players take on the role of either Warriors or Wizards, or an enhanced game where additional classes – Elf Mage, Thief Assassin, Merchant and Sage – are also available. The combat system is easy to master as it uses some very familiar statistics in some very unusual ways reminiscent of the early wargames from which role playing games developed. Upon this basic format, layers of complexity can be added as players desire. This same philosophy is found throughout the game. Dragons at Dawn approaches gaming with none of the assumptions and habits developed from later rules, allowing a return to a kind of free form and open style of interaction between players and referees to develop and play whatever aspects of adventure gaming the group likes best.
Dragons at Dawn is available as a downloadable pdf at
http://sites.fastspring.com/apriorcrs/product/dragonsatdawn
or in print at
http://www.lulu.com/content/paperback-book/dragons-at-dawn/8609478
I am pretty excited  to see a retro-game inspired by Dave Arneson's original rules. I know that the author, DH Boggs has been doing alot of research over the last few years onto this matter, so I am really looking forward to getting my hands on a copy to see the results for myself.

A discussion of the game, can be found here.