Dykstra: Her Quest for Immortality

I have to admit, I wasn't a huge fan of Terry Dykstra's art when I first came across it in the Dungeons & Dragons Rules Cyclopedia. As many of you will know, my favourite edition of D&D is the version popularly known as BECMI written by Frank Mentzer between 1983-83. The 1991 Rules Cyclopedia collected most of the rules from the BECMI boxed sets, but replaced the interior illustrations by masters like Larry Elmore and Jeff Easley with those of Dystra. Now that is a tough act to follow and it was hard for me to look at them without comparing them to what had come before. Later I have come to appreciate Dykstra's art more though, not only in the Rules Cyclopedia, but also in the follow-up product, the Wrath of the Immortals Boxed set which revised the most innovative part of Frank Mentzer's rules: Rules for playing the godlike Immortals.

One thing I really do like about Dykstra's art is that he uses the illustrations to tell stories. One such example is the Quest for Immortality that appears in the Wrath of the Immortals: Codex I:

The first image shows a young female heroine's first encounter with one of the Immortals. This is the one who will become her sponsor and she encounters him in a dream. I am not sure if this is supposed to be a specific Immortal. It could be Ixion, but artist Paul Abrams made Ixion look very different in Codex II. I think the glowy effect is simply the Aura Ability possessed by all Immortals. 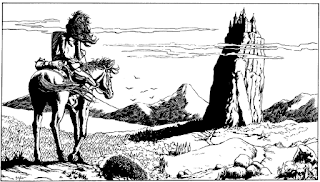 This second image shows the young heroine finally embarking on the quest to become an Immortal. This illustration shows the part of the quest called the Petition, where the PC must travel alone to formally seek out an Immortal to become her sponsor. Most likely she is seeking out the site revealed to her by the Immortal in her dream earlier. 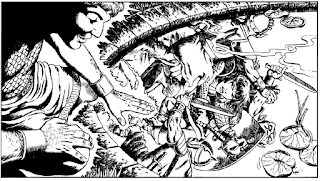 The third image shows the heroine continuing her quest. She is in battle with Orcs or goblins. If this is supposed to take place after she is already on her quest for Immortality, such opponents should be no problem for her. The illustration shows that her sponsor is watching her progress however. 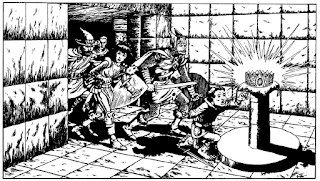 The fourth image has the heroine back with her adventurer group. This image also shows our heroine with a mace suggesting that she is likely the group's cleric.Here they are in some dungeon, having discovered a powerful artifact; a crown of some sorts. This item could be an important part of her quest. Is this an item she has to destory, or something she needs to use to continue her quest? 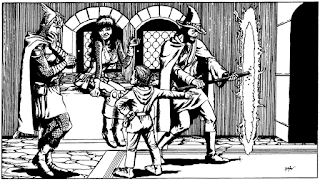 The fifth and last image shows the party, still in the same(?) dungeon. The windows behind them suggest that this could be in a castle above the dungeon from the above dungeon. It seems that they have defeated all the monsters and are trying to figure out what to do with a mysterious portal they have discovered. Will the quest for Immortality take the group to other planes? 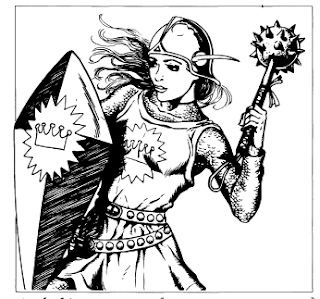 This last image is from the Rules Cyclopedia, also by Dykstra. For a long time I thought this was the same character as the Cleric from the images above. However, she carries a different symbol at this time so this could be a different character. What do you think?