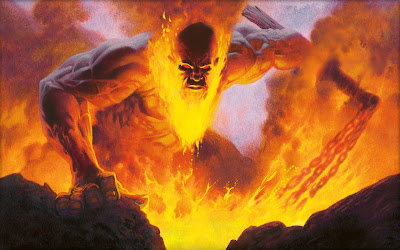 I can't believe it is already the fifth day of Blackmoor Week. Tomorrow is Dave Arneson Game Day! We have very exciting things to share with you all tomorrow and I almost can't wait to get on with it.

First though, let us take a look at what has happened since I posted yesterday's update.

RobJN, my partner at the Comeback Inn, has two excellent articles up at the Thorn's Chronicle Blog: The first article deals with something called Dragonstone Nancelle Weapons. The second article goes specificially into weapons of this type that were used in the Blackmoor Beastman Crusades. Go and check them out!

The Gnomish Embassy has yet another Blackmoor article, this one detailing a band of adventurers called the Wild Cards ready to drop into any Blackmoor Campaign.

At the Piazza, I have written yet another Blackmoor Retrospective Article, this one taking a look at the D&D 4th Edition line for Blackmoor.

At the Comeback Inn, Tracy is adapting a classic Greyhawk module to Blackmoor.

Alright, that is it for now, but expect more posts coming up real soon now that Dave Arneson Day  approaches! It has been a fun week, but more fun is yet to come!