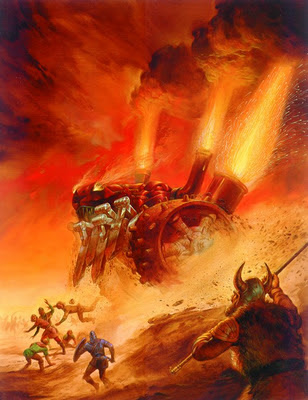 This is the painting that graced the cover of DA1 Adventures in Blackmoor. The painting is called 'the Infernal Machine' and is made by Jeff Easley, one of the artists that defined the fantasy genre for me. In addition to the machine itself and the people trying to escape its destructive path, the painting shows a dwarf who may be responsible for the whole mess.

I asked Jeff Easley what sort of direction he may have received for the painting. Jeff's memory was hazy on the subject (this was a long time ago), but here is what he said:

"I suspect it could have been no more direction than being told to paint a big nasty machine mowing people down. Art suggestions ran the full gamut of complexity, from an oral 3 line description to a number of written half page essays. "

I wonder if the editor (Deborah Ritchie) was thinking back to an obscure reference in the FFC saying that:

Huge Steam Tech Machinery of dwarven make was revisited in the ZGG Blackmoor line with the Dwarven Steam Bore and other similar devices. These were first described in the Dave Arneson's Blackmoor Campaign Setting and further detailed in the supplement Clock & Steam: 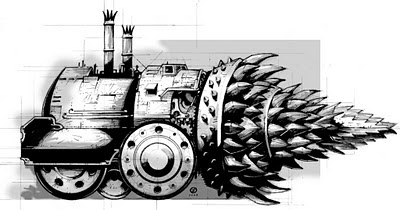 The FFC also mentions a magical device called a "Borer", although the description of that item suggests a much smaller portable device. These huge hulks do seem to be doing a good job of giving the dwarves of Blackmoor some respect though!

PS: Thanks to R Scott Taylor for providing me with the Easley painting!
at January 17, 2012