First Expedition to the City of the Gods 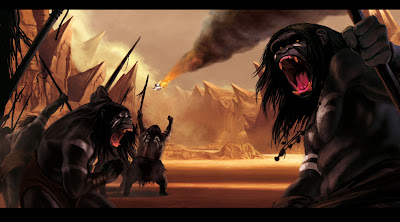 In 1980 TSR published Expedition to the Barrier Peaks, possibly inspired by Gygax' experiences in the City of the Gods in 1976. Last year I talked about how the two Greyhawk heroes, Robilar and Mordenkainen almost lost their lives in this deadly place. It wasn't until 1987 that the City of the Gods became accessible to the general D&D fans in module DA3.  However, Dave Arneson had been sending his players to the area since 1974. Dave Arneson's company Zeitgeist Games revisited the location in 2008 as part of their D20 line.

The first expedition to the City of the Gods is mentioned in JG's First Fantasy Campaign. Was the City always a space ship? Visitors from futuristic interstellar civilizations had been visiting Blackmoor since John Snider started his Star Empires campaign in early 1973 placing Blackmoor on his star map. This may have been what first brought the science fantasy twist to Arneson's campaign and may have been the direct inspiration for the City of the Gods.

What we do know is that the City of the Gods was a deadly place. Mordenkainen and Robilar were lucky enough to escape the City alive. The first group exploring the area were not so lucky. The Wizard of the Woods (Pete Gaylord) and a Peshwa Nomad Hero (Dale Norman) lost their lives on this expedition.  Those who did return did not look back.