Tell Me About Your Character

Dave Arneson's legacy lives on as Blackmoor is being played in numerous campaigns over the world even today. I'd love to hear more about those stories from games played by other Blackmoor groups out there, from the 1970s and up to today. Not just those lucky enought to have played with Dave Arneson himself, but anyone having played in Blackmoor. What were your experiences?

In Rafe's campaign I play this guy: 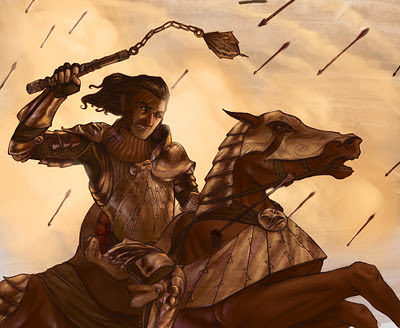 He wasn't always a General of course. Young Harwan grew up in Newgate. His father died when he was quite young, and the boy was drawn to the legends of the towns own hero ruler, the Great Svenny, as a kind of replacement father figure. His real father was also a fighting man, leaving his son a family heirloom: The Sword Grief, said to have once been the weapon of King Robert's son. This might be the reason why he at a young age joined the Blackmoor Military. Being a disciplined and determined young man, he quickly rose to the rank of Sergeant.


It was while serving as a Sergeant that Harwan first encountered the Company of the Maiden. As Blackmoor's forces attacked the Afridhi occupied Duchy of Ten, Harwan's unit was all but wiped out. Joining forces with the Company of the Maiden, they defeated Toska Rusa and destroyed the Well of Souls, liberating what was left of the Duchy of Ten. In the years that passed, Harwan was promoted General and placed in charge of the New Duchy.


He is now approaching 40 and is of mixed Thonian and Skandaharian stock. The years have placed some heavy burdens on his shoulders, perhaps the reason for his now more confident bearing. Life in the court of the New Duchy has not made him soft however. He has preserved his powerful build and imposing stature. Harwan wears a heavy blue cloak, indicating lordhood, and dons Full Plate Armor when riding into battle.

Do you have any tales of heroics in Dave Arneson's setting? I would love to hear about them. Post in this thread, or in the comments section here!