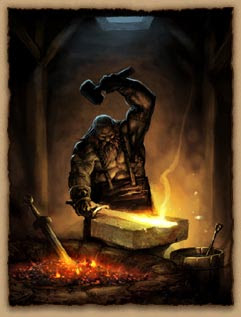 Here's a concept I have been thinking about for a while now. Most D&D campaigns are centered around PCs who are full time adventurers. After having explored their first dungeon, they will go on to their next adventure, and from there on future exploration and battles await. Time between adventures are often spent carousing, training, doing research or hanging out at the Adventurers Guild.

The Part-Time Adventurer Campaign Concept is a somewhat different approach. I think I first thought about it when playing Greg Stafford's Pendragon RPG. In this game, the PCs who are usually all knights, will go on a quest or two, usually during the Summer season. The rest of the year is most commonly spent doing other knightly duties, holding tourneys, persuing romances or administering your stronghold.

This made me think of one of my other big inspirations for gaming: Super hero comics. I always liked Spider-Man. Not just because of the big fights with criminals and super villains. Large parts of those comics also dealt with the other parts of Peter Parker's life. Did he get enough money to pay for his rent? Would he ever sort out those complicated romances of his? Would he finally be permanently fired from the Daily Bugle? Those were the things that made us care about the character.

My idea is that a campaign which deals not with PCs who are primarily adventurers, will make us care more about them. Instead of being full time adventurers, they would more be more integrated in the society they live in, and would be called to do heroics only when needed.

The main criticism I have met so far when I have talked about this is that people think we are going to spent a lot of time playing out non-adventuring stuff. That is not my point. Much of that stuff can be fast forwarded through, to get to the adventuring stuff. But having PCs who are real people with real cares and worries might make both the PCs and the DM feel like its worth investing more than if their whole lives are spent decapitating orcs for money.