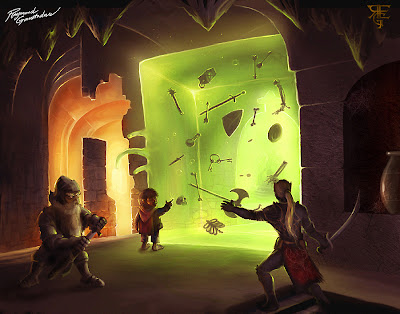 As Dave Arneson's group were exploring their early dungeons, the fascination of the players for these underground activities lead to new and interesting ideas being formed. I have previously discussed David Megarry's ideas for turning dungeon exploration into a commercially viable board game. In the Blackmoor games, dungeons were commonly explored more than once. This lead another player, Ross Maker, to ask about what happened to all the corpses, rusty weapons and armor left behind after a party of adventurers had waded through a dungeon. Wouldn't that become messy after a while?

So, the Dungeon Clean-Up Crew was invented. These consisted of the Black Pudding, Oche Jelly, Grey Ooze, Yellow Mold, Green Slime and others. As this older article at Sham's Grog & Blog mentions, they were even referred to as the Clean-Up Crew in the rulebooks when the monsters first appeared in 1974. 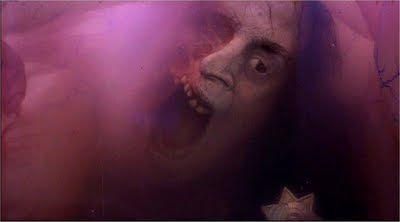 Dave Arneson was a great fan of B-Horror films, and brought many such ideas into the game. According to Gary Gygax, the Green Slime was based on the 1968 movie with the same name. As many of you will know the Black Pudding was inspired 1958 movie The Blob. Greg Svenson has previously described the time when Dave Arneson introduced this horror into the game:

"At this point Dave took us into the laundry area of the basement, telling us he wanted to see what we would do. He had us line up in our marching order. Then he turned off the lights saying a sudden wind had blown out our torches. Then we heard some screaming. We generally scattered as best we could. He turned on the lights looked at what we had done and then went back the other room, telling us that a black blob had killed one of the NPCs who ran into it. We soon found that our weapons dissolved when we struck it. Then we got some torches relit and found that we could fight it with fire. Eventually we killed it losing a couple more men in the process."

In addition to this being an example of truly experimental roleplaying technique by Dave Arneson, the seed to the idea may have been the implementation of Maker's idea that something was eating all the remains left behind in dungeons. Arneson's players were allowed alot of input into the game. A lesson worthy for generations of gamers to come.