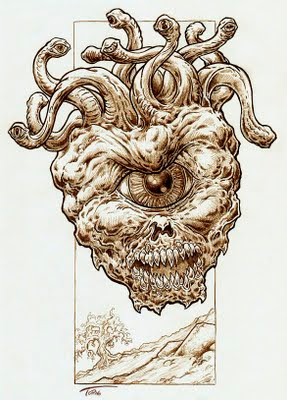 Originally invented by Terry Kuntz, the Beholders first appeared in Supplement I: Greyhawk. I was never really a big fan of the Beholders to be honest, with their strange appearance and seemingly random powers. I tend to like monsters that fit into a certain theme, or are associate with some kind of mythology. I liked the idea of grouping many of the more bizarre creatures together as Aberrations, creatures from a distant plane of weirdness. I linked this to the Dimension of Nightmare from Frank Mentzer's BECMI cosmology.

My main reason for bringing up Beholders now is that they just appeared in Rafael's Blackmoor PbP Game, the Last Fantasy Campaign. Here they are described as Sentinels of the Egg of Coot. That is just brilliant! Not only does the round shape of the Beholders fit well with the Egg, whatever it is, but the Nightmare/Far Realm connection, also fits well with my Cthulhuesque interpretation of the Egg itself.