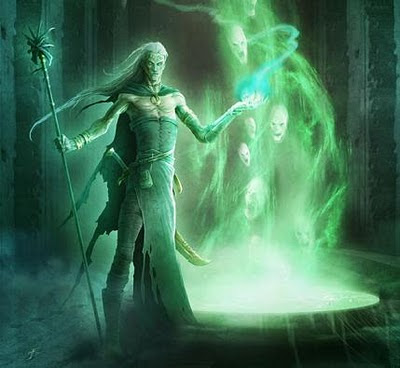 Known as the Green Man, Tamis Azkanikin is one of the most dangerous magic users in the North. It was he who instigated the Vestfold Revolt (an event organized by either the Wizards Cabal or the Eldritch Underground, depending on which version of Blackmoor you are using). The true motives of the Green Man are unknown, but he seems to hate the Regency Council with a passion. This hatred has not diminished since his revolt in Vestfold was crushed. Azkanikin was badly injured in the attack leaving him scarred for life. He has found an ally in Taha Markovic, the Duke of Marban, who shares the Green Man's desire to remove Uther from his throne.

Where did the Green Man come from? Why does he have this strong preference for wearing green? Was he in fact someone who failed becoming the next Wizard of the Wood? Or is he a spellcaster, persecuted by the Wizards Cabal for refusing to submit to their will?