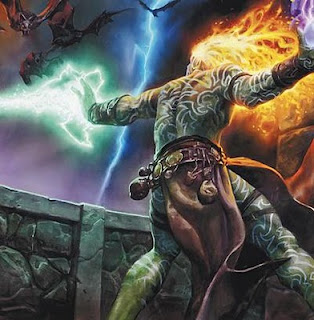 The Wizards Cabal started out as an organization seeking to create some stability in the magical community, preventing very powerful individuals to go on rampage, wrecking the kind of destruction that was seen during the Mage Wars. However, at one point the Cabal seems to have become more about control than any desire for lack of destruction. Spellcasters not willing to follow the "party line", or those with a natural powerful potential (sometimes called Sorcerers) were persecuted and sometimes put to death. This lead to the creation of the Eldritch Underground, an informal network of spellcasters working outside the Cabal in secret.

The most extreme members of this organization are known as the Sworn of Angvile, named after a Sorcerer who chose to  go directly against the forces of the Wizards Cabal, sacrificing himself and his followers in order to bring massive destruction to the Cabal.