Yesterday we learned that there would be no more Blackmoor products from Zeitgeist Games/Code Monkey Press. Today I'm taking a look at what might have been.

Knightime Studio's Jim Pinto was art director for Zeitgeist Games for about two years. In his blog, Jim reveals his last work for Blackmooor, one which he did for C.A Suleiman as a favour: 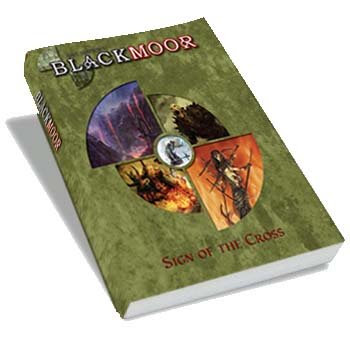 According to Pinto, this was the cover that was supposed to be used for the so-called Blackmoor "2nd Edition". 2nd Edition was the temporary term used for the campaign setting later known as Age of the Wolf. Note the title "Sign of the Cross" on the cover. Most likely this title would have been replaced by Age of the Wolf at a later stage. The cover looks fantastic! I find it interesting that they have departed from their classic Blackmoor Logo. Also, the decision to use five illustrations rather than just one which has been typical for the 3E era Blackmoor products. The Five images are believed to be place holders for the final art. Jim mentions that some design changes were made to the final version, but that this pretty close to what was supposed to be the final version.

Also, notice to the map on the back cover...