DUCHY OF THE PEAKS PART IV: THE PEOPLE 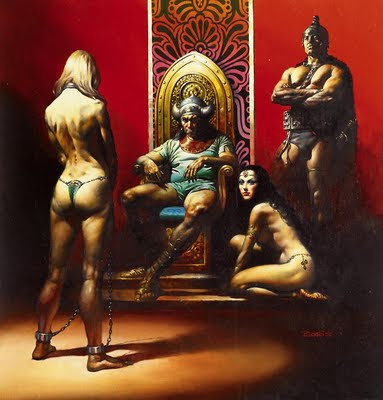 THE PEOPLE
The People of the Duchy of Peaks are mostly of Thonian stock, descendants of the so-called Unwanted, who left the Empire in ca 700. Their features are darker than that of the nobility of Blackmoor. Some have more exotic features due to interbreeding with slaves from distant lands. The society is feudal, with the population divided into nobility, serfs and an unusually large number of slaves. The majority of the population are slaves of course and many of the others live under fairly harsh conditions in the various mining towns of the Duchy, being driven hard by the nobles. Their misery becomes even more apparent when it is contrasted by the life in Starport, where public spectacle, debauchery, wild parties and various decadent forms of entertainment. Use of drugs and the general unhealthy and decadent ways of these people have made them somewhat dim-witted.

Email ThisBlogThis!Share to TwitterShare to FacebookShare to Pinterest
Labels: Blackmoor, Duchy of the Peaks, Unwanted