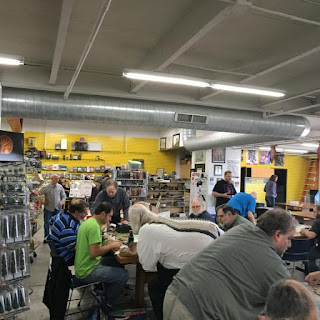 I previously mentioned  how the team behind the excellent documentary Secrets of Blackmoor were teasing a convention for October. Now, however it looks like documentary creators Chris Graves and Griffith Mon Morgan III will not be involved in the convention. Instead, local Minnesota Blackmoor enthusiasts are taking matters into their own hands. The event will be organized by Kevin McColl, a friend of Dave Arneson and owner of the Castle Blackmoor Website and the group called United Geeks of Gaming.

The gaming event that now has been given the official name of ArneCon 0.2 was announced at the Castle Blackmoor Facebook Page.

Mark October 15th. ArneCon 0.2 Returning since 2017 We are planning a gaming convention in October, to tie in with the Birthday of Dave Arneson celebrating Minnesota's history of the origin of Role-Playing Games. And cheer all who were involved in the early years! Emphasis on old school style gaming, its history, and how it's history evolved. More to come location: Geek Partnership Society https://www.meetup.com/geekgaming/events/288131139

According to Kevin McColl, this will be a continuation of similar events run by the group before a hiatus during Covid.

In addition, Kevin McColl will be running games, possibly including a beta test of an upcoming RPG he is working on. Kevin stressed that this will be a smaller event with the possibility of expanding it next year.
-Havard
at September 02, 2022