There has been a lot of talk about  Gaming Conventions connected to Dave Arneson and Blackmoor this year. A few days ago, the idea of a Blackmoor convention in October was teased by the Secrets of Blackmoor documentary team on Twitter. 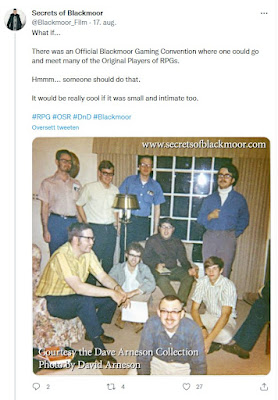 This is the same convention a different source told me about back in July, but the follow up tweet reveals a bit more about what may have been planned. 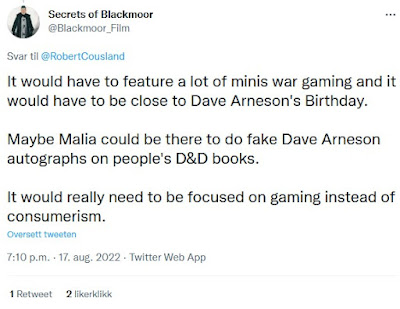 The mention of the convention being close to Dave's birthday is why I speculate that they are looking for October since Dave's birthday is October 1st which has been celebrated for years here at this blog and the main Blackmoor fan hangout at The Comeback Inn and associated social media accounts.
Fake autographs sounds a bit strange, but having Dave Arneson's daughter as a guest of honor at such a convention would be awesome.
My main concern about this is that October is only a little more than a month away. However, for a "small and intimate" event I am sure they can still manage to organize something, especially if many of the locals are already aware of the details.
As I have stated in the past, I will support any project that seeks to honor Dave Arneson's legacy and I hope this convention will come to pass. If not this year, perhaps next year can be an option? Joining forces with DaveCon might help give that convention a boost, but two conventions could also mean twice the fun!
-Havard
at August 23, 2022