Last Monday, I wrote about the origins of the Afridhi of Blackmoor. I mentioned how the player, Deborah Naffziger, who controlled the Afridhi was a young lady who primarily played in Professor Barker's Tékumel Campaign. Comparing this to how another player, Stephen Rocheford was working with Arneson to come up with the background for his character, St. Stephen, it is not unlikely that Arneson and Naffziger worked together on developing the culture of the Afridhi. 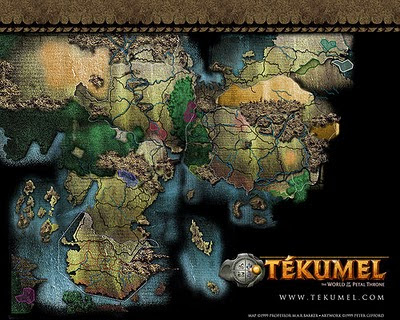 Since both Arneson and Naffziger had experience Barker's campaign, it is not unlikely that they would be drawing on that lore when developing the Afridhi Warrior Culture. The name itself suggests Asian inspiration, which is one of the parts of the world which Professor Barker drew his ideas from. Poster Aldarron, over at the Comeback Inn Forum even suggested that the Afridhi actually travelled from Tékumel to the world of Blackmoor. You can read his interesting theories about this here. I think it is worth exploring further the cross polination between Arneson and Barker's games.