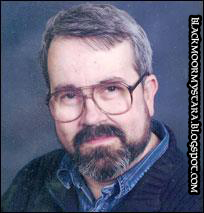 Duane L. Jenkins (August 21, 1948 - October 17, 2016) just passed away. He was 68 years old. I learned recently that he was hospitalized and two days ago he passed. I am reporting this because Duane was one of the original players in Dave Arneson's group. I regret that I never managed to get into contact with him.

My impression from reading the First Fantasy Campaign is that Duane played in the early stages of the campaign when David Wesely also participated. There is a place in Blackmoor called Jenkins Hill that was named after him.  Dave Arneson once told a story about how Duane wanted to play a Vampire in the game and how they were all laughing about that. Most likely the Barony of Glendover was the realm that he founded and was later passed on to other players. I would have loved to ask Mr. Jenkins about his memories from the game.

Right now though, my thoughts go to his friends and family and the remaining gamers from the old Blackmoor group.