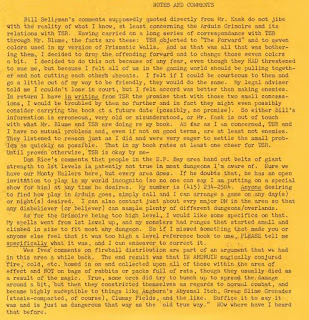 Yesterday, Andy Markham shared the above document on Facebook titled "David A Hargrave - The Arduin Chronicles #2, from Alarums & Excursions #26 (Aug. 1977)" As you can see above, David Hargrave, creator of Arduin, had recieved a letter from TSR objecting to some things in his game and apparently threatening to sue.

Tim Kask who was at TSR at the time offered the following explanation:

In 1977, TSR began aggressively pursuing folks and companies that we thought were infringing on our IP or trademarks and copyrights. We reached out to several and advised them of the legal shit-storm that might befall them if they didn’t knock it off. They were legion, and Arduin Grimoire was just one of many that fell afoul of Brian and Gary’s watchful eye. The bit about the spell is easy enough to deduce-they lifted ours verbatim. Their foreword may have been one of the anarchist genre prevalent in California then; they mostly said make copies, make your own books, screw the publisher’s rights, and so on.

It is interesting in this time when IP discussions are all over the internet in this day of self-publishing and arguments on what can be shared and not etc. This is a good reminder that these discussions have been tied to the hobby since the beginning. TSR themselves were sued by Dave Arneson, the Tolkien Estate and others, but they were also fierce in defending their IP against others. Hargrave being more well known example.

Kask also went into some detail on how times have changed:


By the great stench-laden hairy armpits of Groo, man, it has been 39 years! While it may have been a big deal to them, it was just one of many we fought off. Also consider this, all of you younger folks. We wrote letters and used snail mail: 3 days to get about anywhere in the US; if they wrote back that day and mailed it the next, a week is gone when you get your answer. Long Distance telephone calls on land lines cost big money during the day, lesser money at night. We sent the mag to the printer with a week of advance time; that meant what we wrote in it was a month old when it came off of the presses. A&E had an erratic publishing schedule, anywhere from 3 to 7 weeks. It is most likely that a settlement was reached after something else had gone to press.