To be honest I have mixed feelings about these collectors markets, but Dungeon! was designed by Dave Megarry, one of the original Blackmoor players, which makes it part of Blackmoor history. Note that this is a published copy, not the handmade version Megarry made himself. I wrote more about David Megarry and his Dungeon! game here. 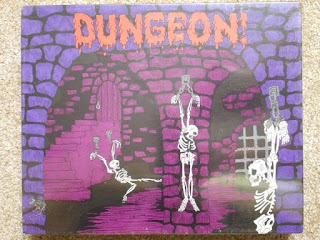 Here is what the Collector's Trove posted on Facebook:

In addition to David's comp copies he received as the designer of Dungeon! he also purchased several lots of 50 sets at a time from TSR and either sold them to retailers or gave them away as giftss. He now only has a half-dozen or so left to give as gifts or to sell and this is one.

As you know, David was a member of the Midwest Military Simulation Association (MMSA), a group of wargamers and friends based in St. Paul, MN, that included Dave Arneson, Mike Carr, Maj. David Wesley, and several others that would go on to design a number of popular wargames.

David took part in playing fantasy adventures in Dave Arneson’s original Blackmoor, a game that incorporated much of the Fantasy Supplement of Gary Gygax and Jeff Perren’s Chainmail Medieval miniature warfare game but innovated with concepts of roleplaying individual characters, experience gains, levels, and most importantly the fantasy dungeon adventure. David Megarry took these experiences and codified them in to a much more regular, but still dynamic, board game, Dungeon! in 1973.

Dungeon! is the fantastic board game that is an ancestor of Dungeons & Dragons and represents the roleplaying game in its purest form – the dungeon delve! Players take on the role of a Hero, Elf, Wizard, or Superhero and play their way across the dungeon-themed gameboard. In their explorations they fight monsters, avoid traps, and find fabulous treasures!

Gary Gygax was the biggest proponent of the game, playtesting, making modifications, creating variants, and shopping it around to various game publishers. At one point, Gary and David made an offering of the game, titled Dungeons of Pasha Cada, to Don Lowry of Guidon Games but it was ultimately decided that it would be too expensive to print the maps. Finally, the game was picked up by TSR who put it into production in 1975.

Since then, Dungeon! has been the most successful board game ever produced by TSR and is still being published to this day! It has gone through dozens of reprintings and new editions, has been translated into a computer game, and even had a line of miniatures marketed for use as pawns. In fact, in August 2012, the game’s current owner, Hasbro, put out a brand new edition of the game and in 2014 revised the game’s presentation to appeal to younger players in yet another release!

Quite the legacy indeed! Now you have a chance to be a curator of a portion of this legacy, care for it well and enjoy!

Here is the link to place your bids:


Although it should be clear from this article, I am not the seller and am in no way associated with the Collector's Trove.

More discussion of this article.