The FFC Coming Back in Print?

The First Fantasy Campaign (FFC), published in 1975 by the Judges Guild Chronicles Dave Arneson's original Blackmoor campaign from the years 1971-1975.

Over the last few years, reprinting old gaming material has become increasingly popular among publishers. Recently, Robert Bledsaw III asked over at the Wilderlands Fans Facebook Group which old JG modules people would be interested in seeing reprinted and updated to Pathfinder or universal systems.

Not surprisingly, several people requested that the First Fantasy Campaign by Dave Arneson would be among the books reprinted. Now the question is, should JG be interested, would it be possible for them to reprint the FFC? 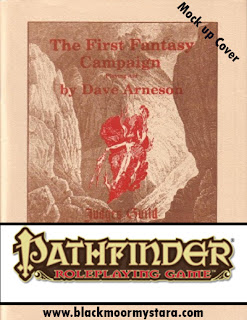 From what I understand, the IP to the FFC is owned by the Arneson family. Bob Bledsaw reverted the ownership of the FFC to Dave before Bledsaw passed away. When it comes to Blackmoor, that IP is owned by Wizards of the Coast. ZGG was operating under a lisence from WotC to publish Blackmoor material, but that lisence expired in 2008. It is possible that the FFC could be published without a lisence from WotC, but it is probably a good idea to check with them to avoid complications.

It should be noted that I am in no way a lawyer and do not posess any inside knowledge of any of this. The above is based on information that should be available online.

I think it would be amazing to have the FFC return in print or even as a PDF. To be the FFC does not need to be updated to have value for gamers today. OTOH, Dave Arneson did make a request if the FFC was to be reprinted, Robert Bledsaw III says (on FB, August 21st 2013):

"As for First Fantasy Campaign, Arneson offered to let us reprint FFC so long as some typos were corrected in a phone conversation with my dad. However, he passed away unexpectedly so we have no clue what typos he was referring to."

When original FFC manuscript fell into the lap of Judges Guild editor, Bill Owen back in 1977,  he decided not to make heavy alterations to the "somewhat disorganized" manuscript. Perhaps Dave Arneson would have liked to see a reprint that, while not neccessarily updated, might be edited in a way to make it organized in a way to make it more accessible to new audiences?