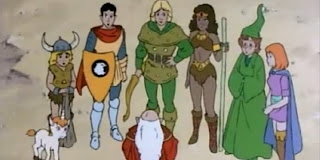 Came across this via Geekdad. Thanks to Luke Gygax for pointing me in that direction. The cartoon was loved and hated by D&D fans, but it is now 30 years since it first came out. According to some, it is still the best filmatization of D&D ever produced by TSR & WotC.

One thing I always wondered about was which setting the kids from the cartoon visited. Referred to only as The Realm, I wondered if it corresponded to one of the published settings? I once argued that The Realm would be best fitted into Mystara, but I have since changed my mind. Check out some more details on The Realm of the D&D Cartoon here. A later article by WotC had the kids from the Cartoons come back as adults and visit the Forgotten Realms.

However, I think The Realm could be more interesting if it was actually multiple realms. Perhaps the kids visited new settings in each episode? Greyhawk, Blackmoor, Mystara and Dragonlance were available when the Cartoons were running (1983-1985). Could the Dungeon Master have transported the kids to all those worlds? Tiamat is strongly tied to Greyhawk, yet Strongheart the Paladin, Warduke and Kelek appear both in Greyhawk and Mystara products.

In any case, the cartoon is a classic, for many helping to share the perception of D&D for better or worse! :)