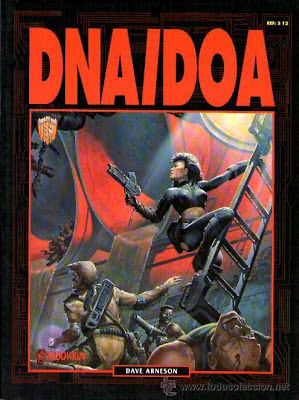 Dave Arneson may not have written a large body of RPG sourcebooks and supplements, but while he is best known for the Blackmoor modules, he also authored an adventure module for FASA's Shadowrun RPG in 1989 called DNA/DOA.

The adventure involves the PCs being hired by a biotechnology company. They are hired to break into an Aztechnology lab and steal a kind of virus that affects human DNA. Further complications eventually lead the group into the sewers below Tacoma, Washington, where they have to deal with a tribe of Orks.

The Blackmoor fan that I am was overjoyed to notice that the establishment where the adventure begins is called Corporate Bums and Indigents Club often shortened to CBI, undoubtedly a reference to Blackmoor's own tavern of fame, the Comeback Inn. Seems like even at this time when he was prevented to publish his own fantasy setting, Blackmoor was always close to Dave Arneson's heart.