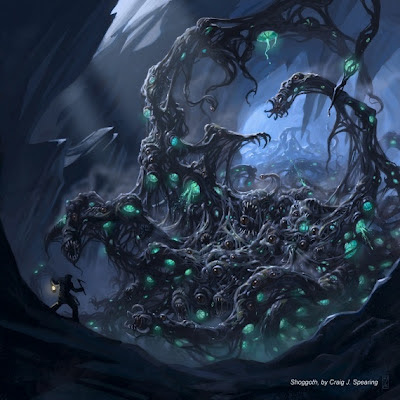 As mentioned in a previous post, there are certain forces at work in Blackmoor, seeking to use ancient Sar Aigu Rituals to achieve their dark goals. The purpose of these rituals is to awaken the Sleeping Ones. Millions of years ago, there existed Beings whose power rivaled that of the Gods. While these Outer Beings were eventually driven out of the Multiverse, many of their dark servitors remained. In the Cthonian Age, members of these Servitor Races were able to aid creatures like the evil Carnifex in their dark quest for power. But even the reign of the Carnifex came to an end and the creatures who had supplied them with power were destroyed, or imprisoned beneath the earth, in the depths of the sea or on other planes of existence. There they were placed into unnatural slumber, so that they could no longer do harm.Thus they slept through the last Ice Age.

During the last Stone Age, 6.000 years ago, the many of the Brute Men of the North were magically influenced by the dreams of such Sleeping Ones, known as Burrowers. These Brute Man Wars were also finally ended, though it is unknown if the corruption that comes in the form of dreams has been fully stopped.

Some scholars believe that the Egg of Coot is one such Greater Servitor of the Outer Beings. It was buried beneath the sea, but it was once again awakened by the energies released during the Mage Wars. It stands to reason then that the servants of the Egg of Coot and its allies, such as the Priesthood of Id, are interested in awakening other such Sleeping Ones. As only divine intervention has succeeded in defeating these entities in the past, it seems that the future of Blackmoor would be forfeit should these agents succeed.

The Outer Beings were created by James Mishler and Geoff Gander.
Thanks also to Freedom92 for suggestions and encouragement! :)