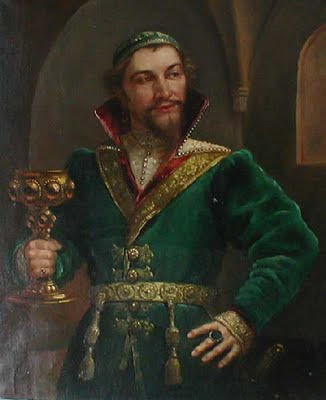 In the third year of his reign King Robert I of Thonia established the Northern Marshes as an outpost of his realm. To secure those lands, he ordered the construction of fortifactions there, which would later become the foundations of Blackmoor Castle. One of King Robert's staunchest supporters and an eager advocate for expanding the kingdom was the Earl of Walworth. For his efforts for the realm, Walworth was awarded with the Order of the Morningstar, one of the highest orders of the Empire. However, relations between the Walworths and the Royal Family were not always amicable. At one point Walworth even attempted to assume the throne himself! However, once Robert I had reclaimed the throne with the support from the lord of Blackmoor, Walworth explained that his actions were based on the rumour that the king had perished. Because of this, Walworth was able to avoid disgrace and his line remains strong among Thonian nobility even today.

Behind the Curtains:
Earl of Walworth was Gary Gygax' title in the Castle & Crusade Society. The story about his attempt to assume the throne is based on the fact that #10 of the Domesday Book lists Gygax as King rather than Kuntz. Other details of Walworth's story are also derived from notes from the C&C Society. While Walworth is never mentioned in any Blackmoor material, we know that Dave Arneson did incorporate much of the structure from the C&C Society as background for his campaign.