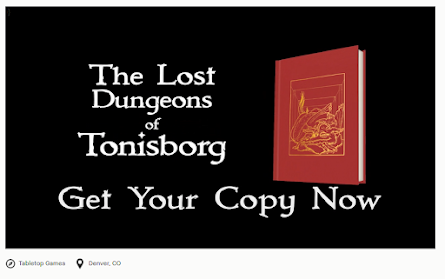 As mentioned at The Comeback Inn yesterday, the new Kickstarter for Greg Svenson's Lost Dungeons of Tonnisborg is now live on Kickstarter. Within hours of launch, the Kickstarter reached its initial goal.

Greg Svenson was one of the early members of Dave Arneson's Blackmoor Group and Dave mentions Greg's role in Blackmoor in the First Fantasy Campaign (1977). Greg originally designed this mega dungeon below the town of Tonnisborg which was placed in the Blackmoor map on the spot where Vestfold appears in later Blackmoor material. Interestingly both Vestfold and Tonisborg share real world inspirations. Greg has also been a friend and eager supporter of my work since I first started doing Blackmoor stuff on this blog and the Comeback Inn so I hope this project is highly successful!

Behind this Kickstarter is the duo known as the Fellowship of the Thing (Griffith Morgan and Chris Graves) best known as the producers of the Secrets of Blackmoor documentary. Mr Morgan recently spoke about this project in this video interview with the Wandering GM

Disclaimer: The author of this blog is in no way associated with this Kickstarter or any commercial activity connected to RPGs.

Check out the Kickstarter here.