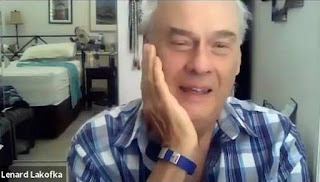 I was sad to hear about the passing of another legend in tabletop gaming today, Len Lakofka. This blog's main focus is the people involved with the gamers from Dave Arneson's group, but today I feel like paying respect to Mr Lakofka.

Perhaps best known as the main whose campaign gave its name to the Lendore Isles of Greyhawk and the Leomund of various spells across all editions of Dungeons & Dragons, Len created the L-series of modules, a project he continued after his departure from TSR releasing L4 for free to fans via Dragonsfoot.

Len's involvement with the hobby goes back to the 1960s when he got involved with the International Federation of Wargamers (IFW) at one point becoming President of that organization and helping Gary Gygax organizing GenCon.

I never got to meet Mr Lakofka in person, but we were friends on Facebook and I got to discuss some aspects of the history of D&D with him a few months back. He was always very polite and helpful. I am sad to hear that he is gone.

Photo is screenshot by Bryan Nystul.