In 2019 it looks like Tortles is becoming one of the more popular D&D races! Crazy as it sounds, this race of turtle-like humanoids was introduced to the D&D 5th Edition with Volo's Guide to Monsters in 2016. In 2017, rules for playing Tortle PCs was brought to D&D 5E fans with the Tortle Package, a PDF product sold as an expansion to Tomb of Annhilation detailing the Tortle lands called the Snout of Omgar. Earlier this year, TruBlood actor and D&D superfan Joe Managiello revealed that he had created a character called Krull the Tortle. Krull is somehow connected to Managiello's main PC, Arkhan the Cruel known from Matt Mercer's Critical Role, but the Tortle will appear in Descent of Avernus, an upcoming D&D5E adventure from Wizards of the Coast set in Baldur's Gate.

Tortles go way back in the history of D&D however. In 1984, Kevin Eastman and Peter Laird created the Teenage Mutant Ninja Turtles for Mirage Comics, but only a year later Tortles appeared in D&D in Merle and Jackie Rasmusens's The Savage Coast set in the world of Mystara and for the BECMI edition of D&D. The module was followed up with a companion adventure spanning two issues of Dungeon Magazine called Tortles of Purple Sage, also by the Rasmussens. 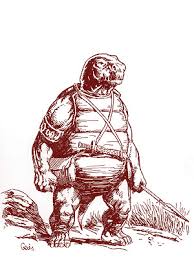 Tortles got an even more prominent role in Mystara and the Savage Coast Subsetting when they appeared in the Voyage of the Princess Ark and later in the AD&D 2nd Edition Red Steel Boxed Set detailing this part of Mystara.

In 2017, Wizards of the Coast staffers Mike Mearls and Jeremy Crawford had what seemed like a heated twitter debate about whether Tortles were a stupid idea or not. It late seems like it was all a (clever?) marketing ploy for their Tortle Package.

Over the years, the world of D&D has seen several iconic Tortle NPCS in D&D books and in other mediums. In addition to Managiello's Krull character, Matthew Mercer played a Tortle bard named Orly Skiffback in the Critical Role streaming series.

You can find a complete list of Tortle references in D&D books here.

Are you a fan of Tortles? Why do you love them so much? If you don't love them, then Mike Mearls is awaiting your calls.