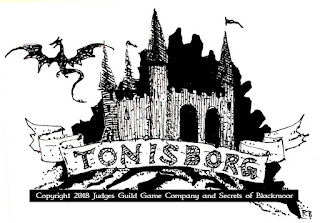 The City and Dungeon of Tonisborg has long historic ties to Dave Arneson's Blackmoor. Greg Svenson, whom Dave has described as one of his most enthustiastic players, developed this area of map in Dave Arneson's Campain. When Dave added the city of Vestfold, named after a region in Norway, Greg made adjustments so that Tonnisborg became relocated on a small island that is part of the greater City of Vestfold, the largest city in the Kingdom of Blackmoor.

People who want to learn more about Tonisborg are now in for a treat. As reported by the Secrets of Blackmoor Website, Greg Svenson is working with the producers of the documentary project "Secrets of Blackmoor". The plan seems to be that Tonninsborg will be a published adventure which will be a "thank you gift" to those who invest in the Kickstarter for the Documentary. Also involved with the Tonnisborg module are Dan Boggs (aka Aldarron), publisher of Champions of ZED and Dragons at Dawn and Bob Bledsaw II of Judges Guild. 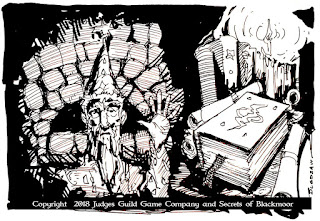 The whole "invest in Kickstarter for documentary to get a module" sounds a bit complicated to me and I think I would have preferred to have a separate Kickstarter for the Tonisborg project, but in any case I am really curious to see what this module will be all about. Having Aldarron on board with this project makes me even more optimistic as he is a talented game designer and someone with intimate knowledge of Blackmoor. If you are curious to see more of Greg Svenson's ideas for Blackmoor, make sure you get the free PDF booklets by Greg hosted at The Comeback Inn.

See more discussion of this article at the Comeback Inn here.